During the Board Business meeting on December 18, 2017, Owner's Representative Kerry Leonard reported that the project remains on budget. He also highlighted that after Bid Group 3, 93% of the trade contracts will have been bid, awarded, and assigned to Bulley & Andrews.

Of the twelve bid packages opened, ten were considered for award and assignment, and approved during the Business meeting:

The Board also took the following actions regarding change orders:

Mr. Leonard explained that the five bid packages not being awarded will be bid early in 2018. The five packages include two deferred packages, two bids to be rejected, and one bid package that was not opened. 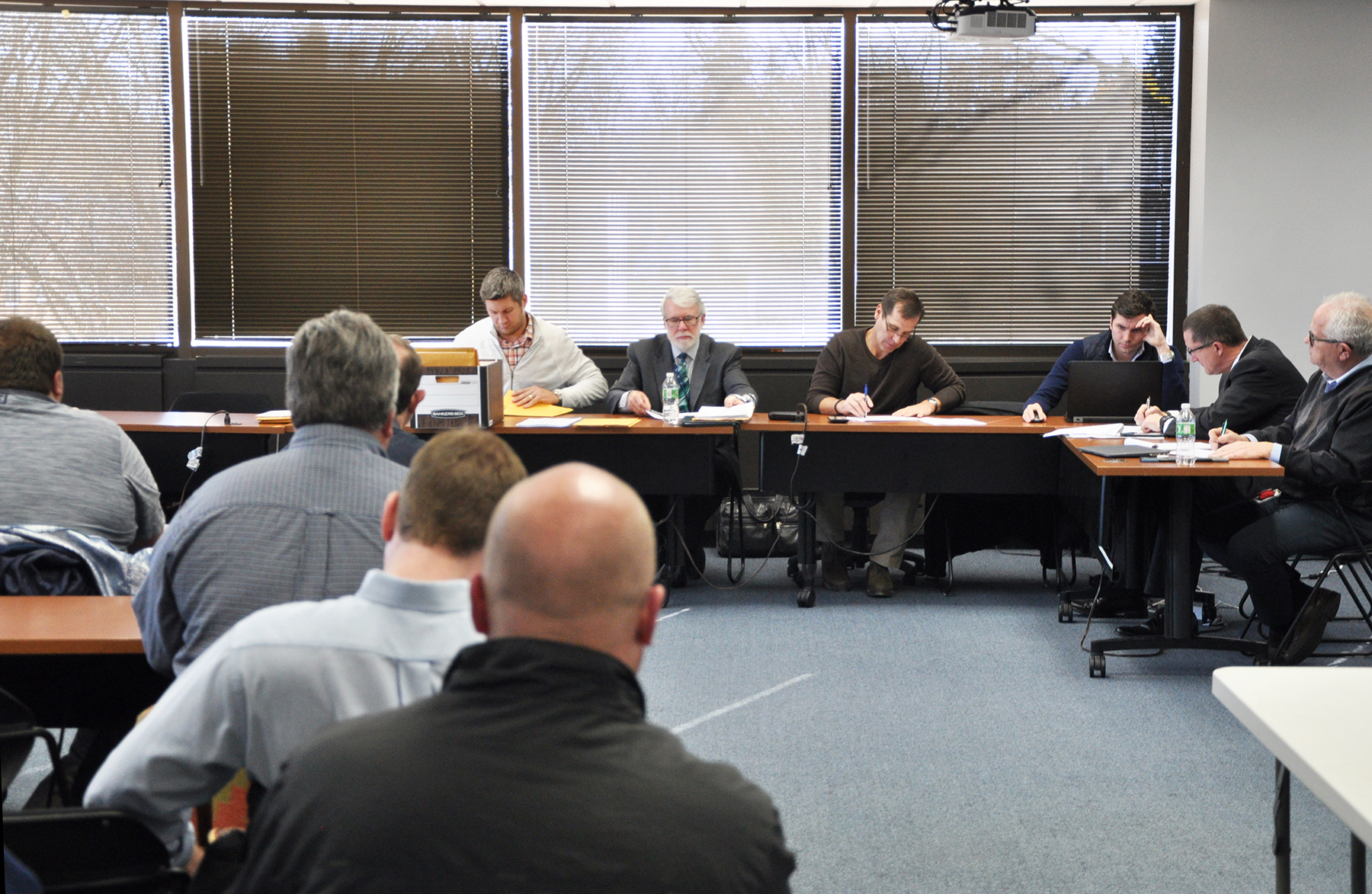 As of Thanksgiving Day 2017, the view from one of our webcams showing the HMS construction in action: 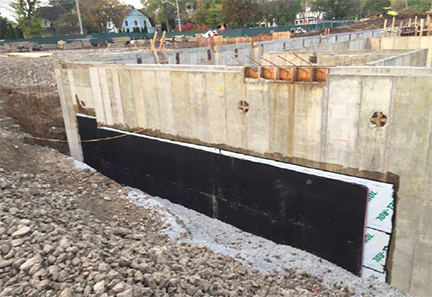 During the October 30, 2017 Board Business meeting, Chief Financial Officer and Treasurer Mohsin Dada and HMS Project Owner's Representative Kerry Leonard provided an overview of the HMS construction project, with particular focus on the budget and the status of Bids. Board President Burns confirmed that the Facilities Committee, the Finance Committee, or both committees had vetted the information being presented. Mr. Dada noted that per a suggestion by the Board Finance Committee, he and Mr. Leonard prepared a document showing cash flow as it relates to anticipated expenditures. He said the committee has been discussing the best time to complete the second portion of the bond sale, noting that his expectation is the project will come in under budget, and therefore the intent is to sell bonds for the amount actually needed, rather than the full amount allowed per the referendum. He and Mr. Leonard then highlighted potential opportunities for savings in the project costs and new tools that have been developed, such as an Expenditure Authorization Form, to improve the budget tracking and approval process.

Mr. Leonard then discussed Bid Group 3, which includes 14 bid packages. The bid opening is scheduled for November; Board approval will be sought in December after the Facilities Committees has reviewed the materials. Approximately 95% of the contracted work will be awarded at that point, Mr. Leonard remarked. Per a Board question, he briefly highlighted information on the alternates described in his Board Report, including bleachers, flooring, and acoustics for the music spaces. It was clarified that Cordogan Clark & Associates is not charging the District for their preparation of the documentation for the bleachers alternate, and because curtains have already been included in the budget as an acoustic solution for the music area, there will be a "not to exceed" amount for any other considerations (i.e. acoustic panels). Bid Group 4 will be bid in spring, he said. Mr. Leonard lastly commented on Re-Bid Awards from Bid Group 2 being presented for Board approval. He confirmed that with approval of the two actions being recommended at the meeting, the only outstanding Bid Group 2 package would be Joint Sealants, which Bulley & Andrews is currently seeking proposals to fill.

Later in the meeting, the Board took the following actions: 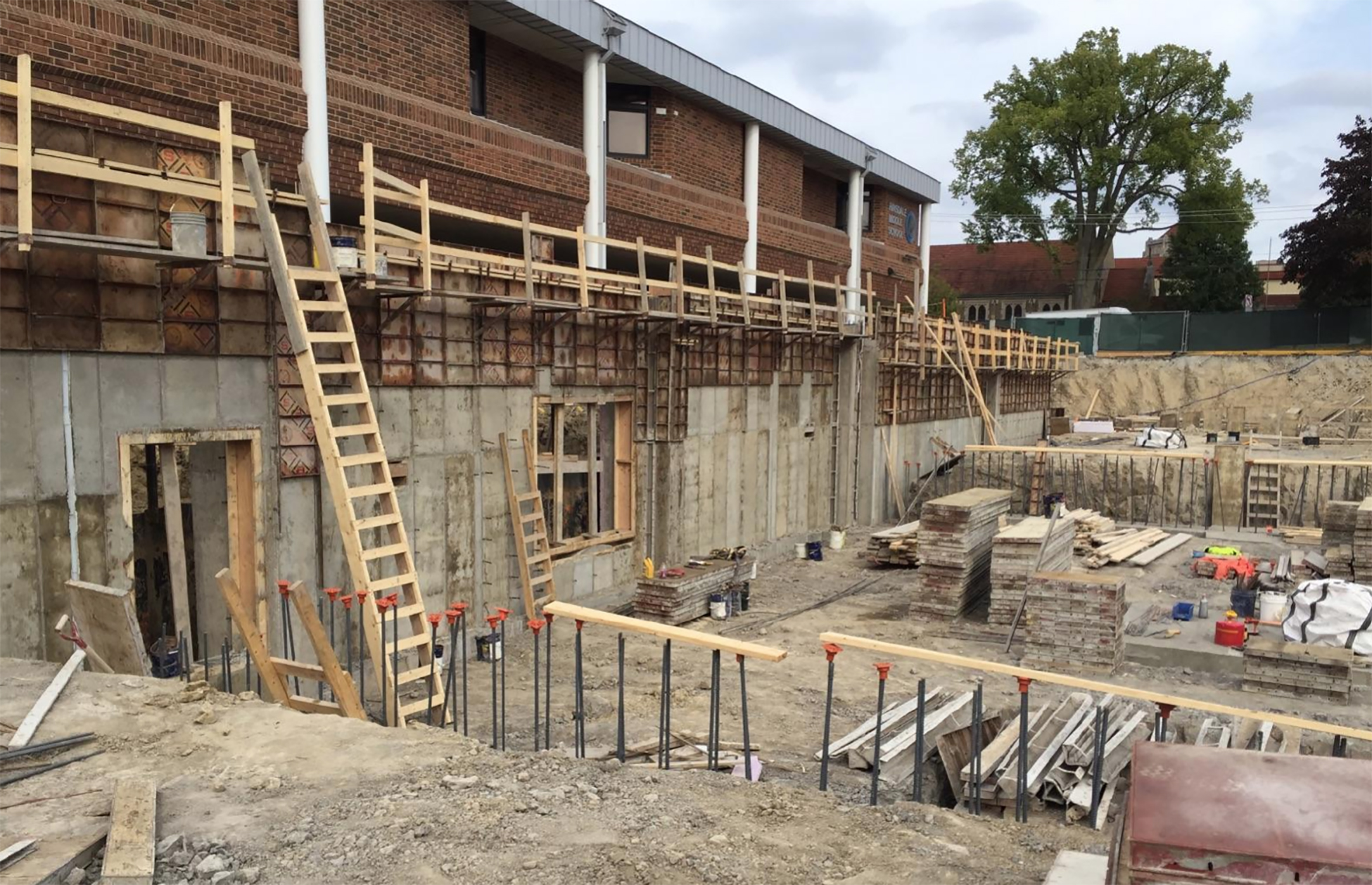 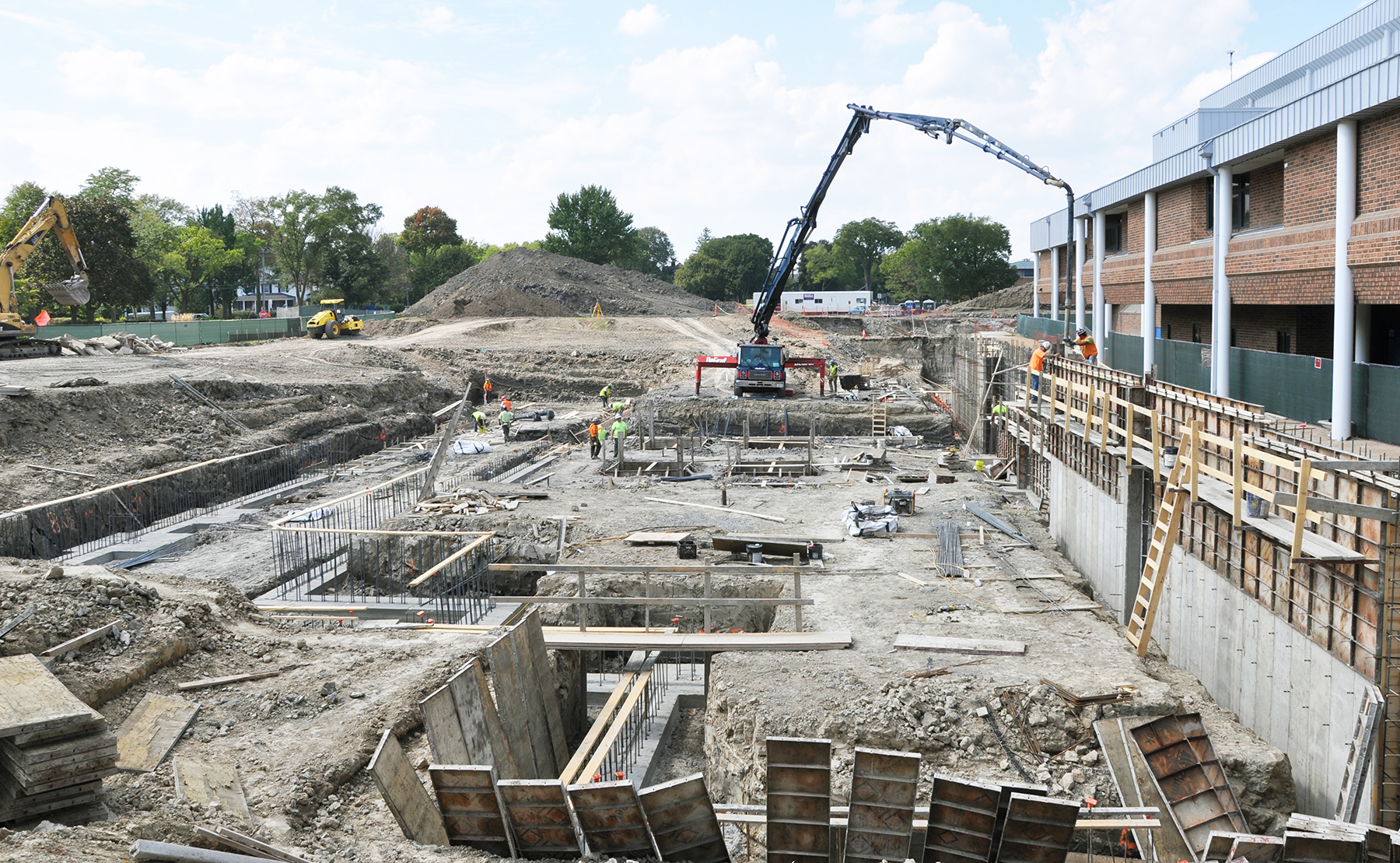 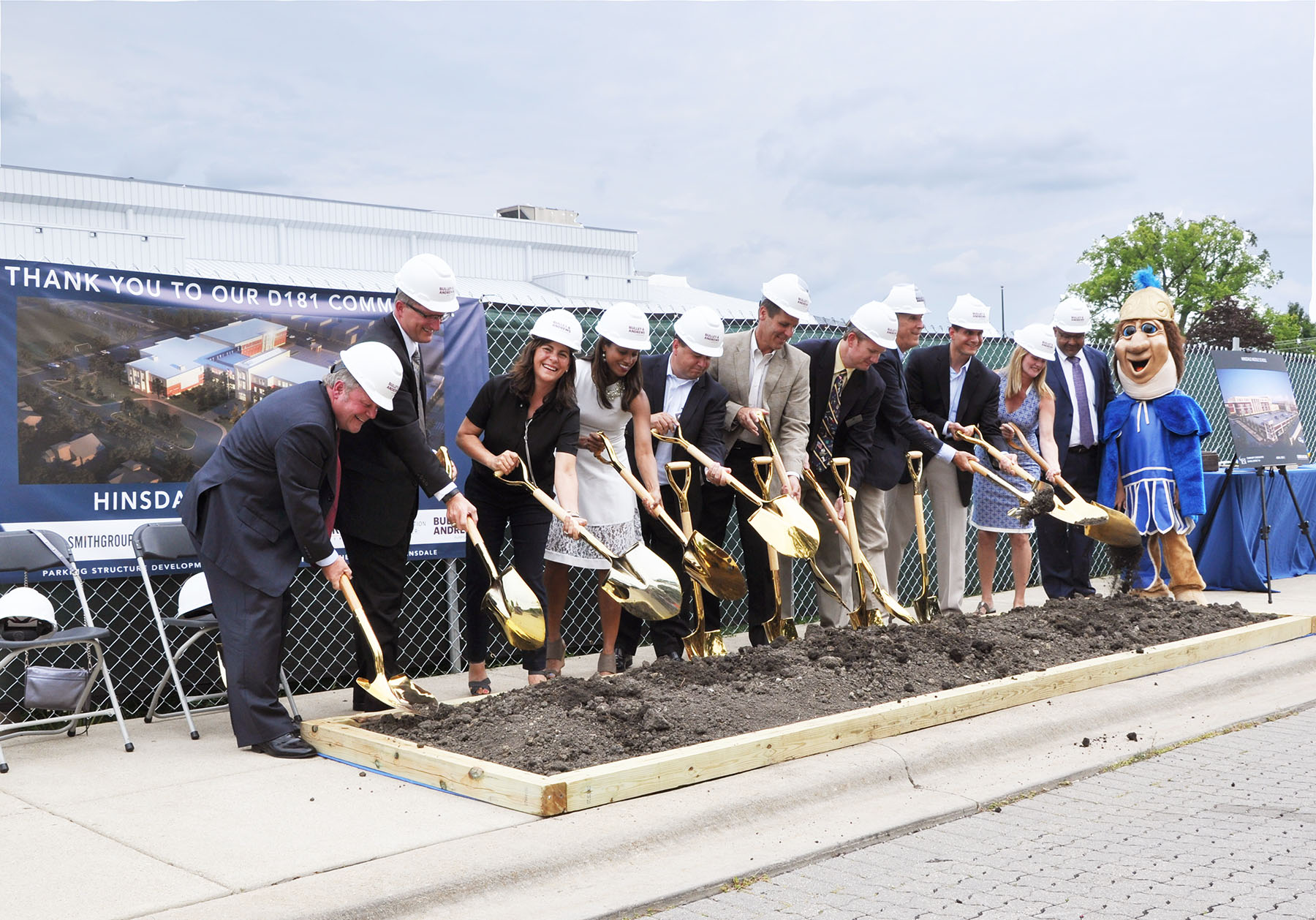 Save the Date: New HMS Groundbreaking Ceremony
All District 181 community members are invited to attend a groundbreaking ceremony for the new Hinsdale Middle School on Monday, August 14 at HMS (12pm). Please save the date - we hope you can join us! We look forward to this opportunity to thank our District 181 community and come together in celebration. Event details will be shared in early August.

Budget and Tax Impact
We are currently on budget, with 80% of trade contracts bid and awarded; detailed budget information is posted on the HMS Construction page of our website. We invite you to read “HMS Referendum Bond Sale Cost and Tax Impact” - a document that provides a comprehensive overview of the anticipated tax impact for homeowners with updated figures now that the first of two bond sales is complete. We have also outlined how these figures compare to pre-referendum estimates. The format of information is the same as pre-referendum communications that were shared with the community to create a consistent, transparent tool for understanding this important information.

Timeline
Despite being several weeks behind the original schedule due to litigation delays, the project team's hard work and the cooperation of the Village of Hinsdale have allowed us to so far maintain August 2018 as the target for opening a new HMS, pending weather or unforeseen conditions. If all goes as planned, we will know by mid-January if we can maintain the goal of opening the new school in August 2018. The construction manager's milestone project schedule shows key dates through completion of the new school construction. We continue to monitor the short-term timeline in regard to the return of teachers and staff, events such as Back to School Day, and the first day of school on Tuesday, August 22.

Parking Near HMS and Valet Service
A set number of parking spaces in the temporary lot will be reserved for HMS staff during the school year; the Village of Hinsdale will manage all remaining spaces through a pay box system. A valet service continues to be offered as a convenience for residents and visitors until the temporary lot is complete (on or near August 3). The valet station is located on Garfield Avenue, in the alley area just north of the HMS building. Vehicles can be dropped off at the valet station from 9am to 5pm. The temporary lot will be in use until the two-level parking deck is complete.

Accepted Bids and Alternate Bids
Trade Contracts for the HMS project were divided into four Bid Groups. Contracts for each of the 12 bid packages in Bid Group #1 have been awarded, and 15 contracts were awarded for bid packages in Bid Group #2. At this time, 80% of the trade contract bids have been awarded. Bid Groups #3 and #4 remain to be bid. Bid Group #3 includes interior finishes; Bid Group #4 includes existing building demolition, site restoration, and costs related to the construction of the parking deck. The Board recently approved several Alternate Bids, as well, including improvements for the HVAC system, operable windows, and improvements in the P.E./Health area. More information about the bids and alternates is available on the HMS Construction page of our website.

Next Steps in July and Early August
Over the next 2-3 weeks, some of the key project actions will include:

During the Board of Education meeting on June 12, 2017, HMS Project Owner's Representative Kerry Leonard explained that three contracts needed to be awarded to complete the award of Bid Group 1 Contracts. The Board approved the award and assignment of the following three contacts to Construction Manager Bulley & Andrews, LLC: Concrete, Waterproofing, and Earth Retention. The Board additionally authorized the administration to issue a Notice to Proceed to Bulley & Andrews, LLC and authorized Cordogan Clark & Associates to resume all design services on the Hinsdale Middle School project. During the June 12 meeting, the Board also took action to select a bond sale scenario. (See the HMS Construction Budget section for details.) Related resources are also available on BoardDocs.

During the Special Board of Education meeting on June 6, 2017, the Board engaged in discussion related to HMS construction and the bond sale. The Board also took action on six contracts (Earthwork, Site Utilities, Temporary Power, Asphalt, General Trades, Temporary Fence), a Notice to Proceed for the Temporary Parking Lot, a Limited Notice to Proceed for the Modular Move, and an Addendum to the Temporary Parking Intergovernmental Agreement with the Village of Hinsdale. Related resources are available on BoardDocs.

(Back to the HMS Construction Main Page)