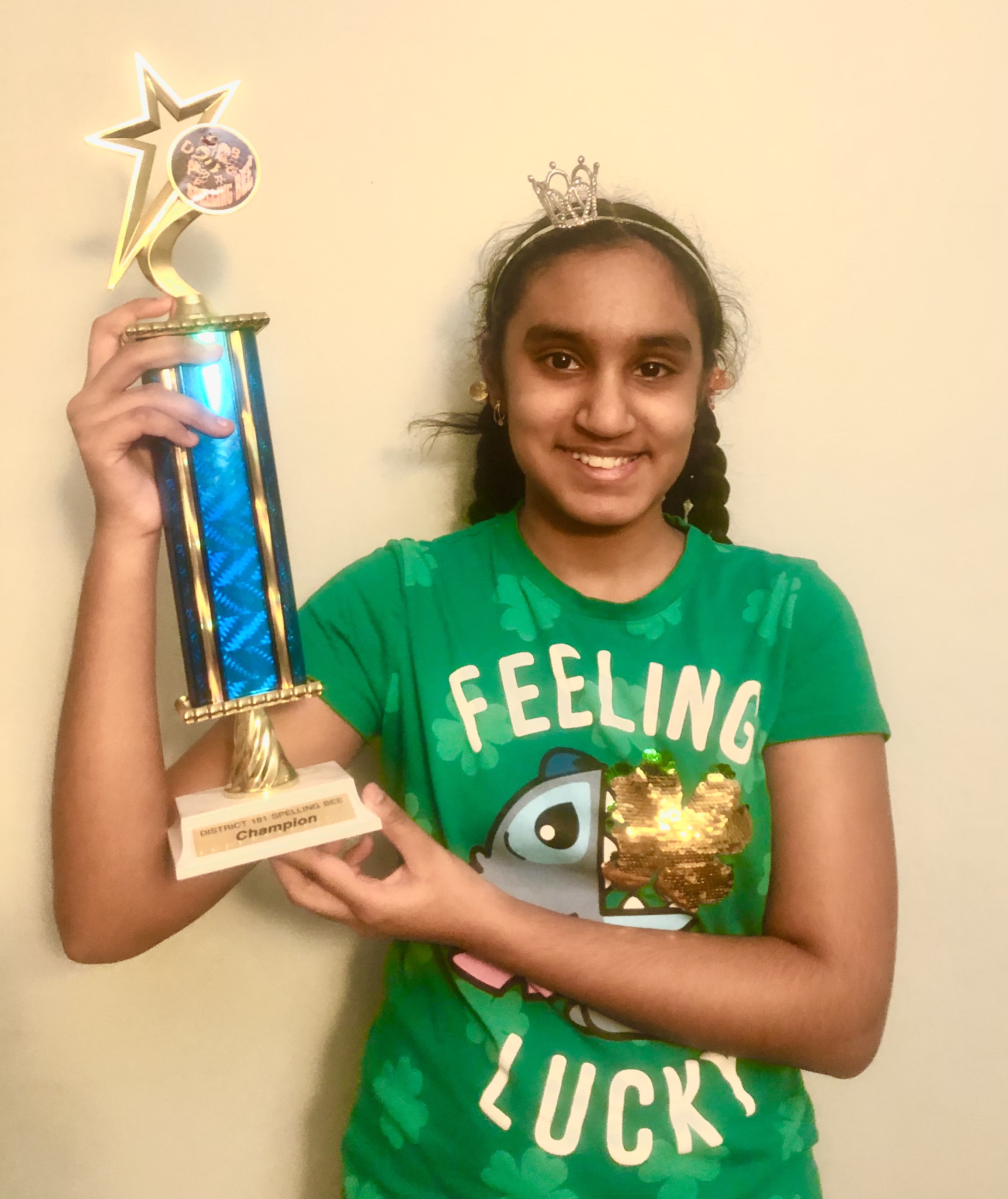 When Srinidhi Rao was just 2 years old, she was walking to her father's doctor's office and spelled a word she saw on the wall. "C-a-r-d-i-o-l-o-g-y." It was the beginning of a lifelong love of spelling.

Srinidhi, now a fifth-grader at The Lane School, just qualified to compete in the 2021 Scripps National Spelling Bee, one of her many spelling accomplishments but the most prestigious to date.

"I love learning words in new languages and doing stems to understand words better," Srinidhi said. " I feel so good when I have spelled a difficult new word correctly by deciphering it from the word roots and language patterns."

This is the fourth consecutive year a D181 student has qualified for the National Bee.

"We are so proud of Srinidhi's accomplishments and look forward to seeing her continued success," said D181 Superintendent Dr. Hector Garcia. "It is fascinating to watch her excel on the stage and we wish her the best of luck at the national competition."

Srinidhi's mother, Leelaa Rao, said people are always amazed when they see her daughter's talent and learn her age.

"I am very thankful that one of her teachers took special interest in her in kindergarten," Leelaa said. "We have nurtured her love for spelling since then while making sure she isn't just a spelling machine. We want her to understand the definitions as she learns and understands more about how language works."

Srinidhi studies every day after school and after finishing her homework and about 5-6 hours on weekends. She also has a strong interest in music and performs in classical music concerts with her grandmother and mother.

Her dream career is to follow in her father's footsteps, Dr. Rammohan Rao — she wants to be a pulmonary critical care doctor.

"She originally wanted to be an ophthalmologist but after seeing her father treat COVID patients this past year she was inspired, and she changed her mind," Leelaa said.

Srinidhi won the District 181 Bee earlier this year and qualified for the Scripps Bee by placing first in the At-Large Region One Regional Spelling Bee, when she spelled the word "tomium" correctly.

Due to COVID-19 restrictions, Scripps will hold the initial rounds of the national bee virtually for the first time. Leelaa said one of the downsides of virtual bees they've experienced so far is there can be technology glitches that spoil the rhythm of the event.

"She got a lot of practice in virtual bees over the summer, but if the connection is bad when you spell a word, even if you spell it correctly, you have to spell another word," Leelaa said.

Precise details on the virtual options for the Scripps Bee are yet to be posted but the finals will feature 10-12 students who will gather in the ESPN studio, Disney World Florida, on July 8 for the televised event. Finalists who will travel to Orlando will have advanced through three levels of virtual competition: the preliminary, quarterfinal, and semifinal segments.

"I want to be spelling in front of everybody during the ESPN primetime TV event," Srinidhi said. "I need to work extra hard to make that happen to be among the handful of finalists this year."