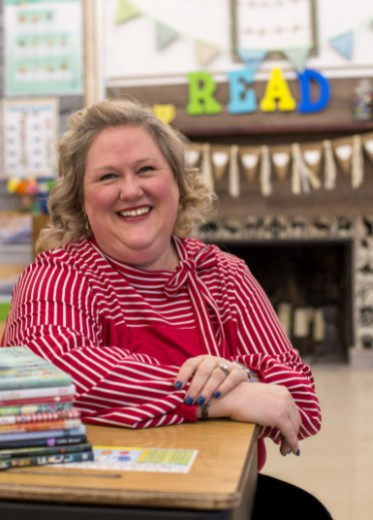 Last spring, we solicited nominations from our community and staff for this award. We received an astounding 60 nominations for 30 individuals. After reviewing the nominations, our administrative team selected Mrs. Molinero based on the number of nominations she received and the content of the nomination letters. The District will honor all 30 nominees in its publications and its top 5 nominated teachers at a Board meeting later this year. Nominations for 2023 Teacher of the Year will be shared in our newsletter once they open on ISBE's website.

Here are some of the things Mrs. Molinero's nominators had to say about her:

Mrs. Molinero has taught 25 years total — 23 years at Madison school and in second grade for nearly all that time. Currently, she is on the ELA committee for second grade Districtwide and has served on this committee for about 11 years. She helped to write the District curriculum for second grade, created all the second grade common assessments, and helped to select the reading program they are currently using. She has been on the technology committee at Madison for the past 7 years and has piloted Smartboards, the front row sound system, and iPad usage at the elementary level. For the past 5 years, she has been using Seesaw and she just received her official certification as a Seesaw Instructor. Along this vein, she has presented Seesaw (uses, management, and more) at major conferences like the Illinois Computing Educators Conference and at elementary buildings outside of this district such as Homer 33c, Meadow Lane, and Summit. In addition to Seesaw, Mrs. Molinero is working to become a Certified Google Instructor. Over the years, she has written several grants through the District 181 Foundation, including the one for a former three-season greenhouse at Madison School. In a normal year, she also leads a Garden Club at Madison so students can work with her to plant seeds and grow vegetables. Over the summer, Mrs. Molinero meets with students to harvest and care for the garden. Their extra veggies are donated to the Hinsdale Food Pantry.

Mrs. Molinero has helped ensure that our son has thrived academically and emotionally, and we praise her for how she has been able to make over twenty 7- and 8-year-olds scattered across our community feel like a family [during remote learning]. Our son has bonded and connected to Mrs. Molinero unlike he has with any other teacher, and it is because she has taken what is a horribly trying situation and made it work for our remote cohort. I commend Mrs. Molinero for how she has tirelessly and relentlessly worked and tweaked and refined her lesson plans and teaching styles to not only keep her remote classroom learners engaged, but also ensured that they know they are cared for. I would have thought that nearly impossible before our experience, but she has done this with grace and excellence.

She uses humor and humility as she speaks, and has mastered the inevitable classroom management challenges in ways that allow students the freedom to share and participate, but also the discipline to keep learning at the center.